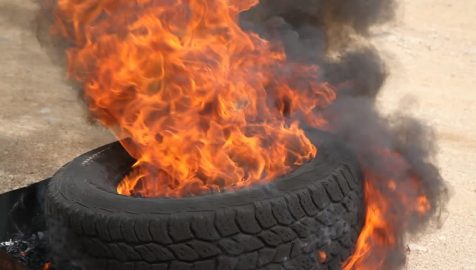 Both criteria and non-criteria pollutants can cause significant short and long term health effects. Depending on the length and degree of exposure, these health effects could include irritation of the skin, eyes, and mucous membranes, respiratory effects, central nervous system depression, anxiety and cancer.  Dioxin is a highly toxic compound which may cause cancer and neurological damage, and disrupt reproductive systems, thyroid systems, respiratory systems etc.

Especially troubling is the exposure that children living within these communities are inadvertently being subjected to. Children, foetuses, nursing babies, elderly, asthmatics, and immune suppressed individuals are all much more vulnerable to the pollutants released during burning of tyres.

Even a nursing woman can transfer the pollutants she inhales to a baby through the fat in her breast milk.  During breast-feeding, infants are exposed to higher concentrations of organic pollutants than at any subsequent time in their lives.

Saving money on fuel by burning tyres should not take precedence over public health. Unfortunately, in small villages and other underdeveloped areas where tyre burning kilns sustain much of the local economy, exposure to these toxins is inevitable with the current practices being employed. The need of the hour is to promote sustainable scrap tyre management systems such as pyrolysis and crumb rubber production.

15 thoughts on “Open Burning of Tyres: Impacts on Public Health”